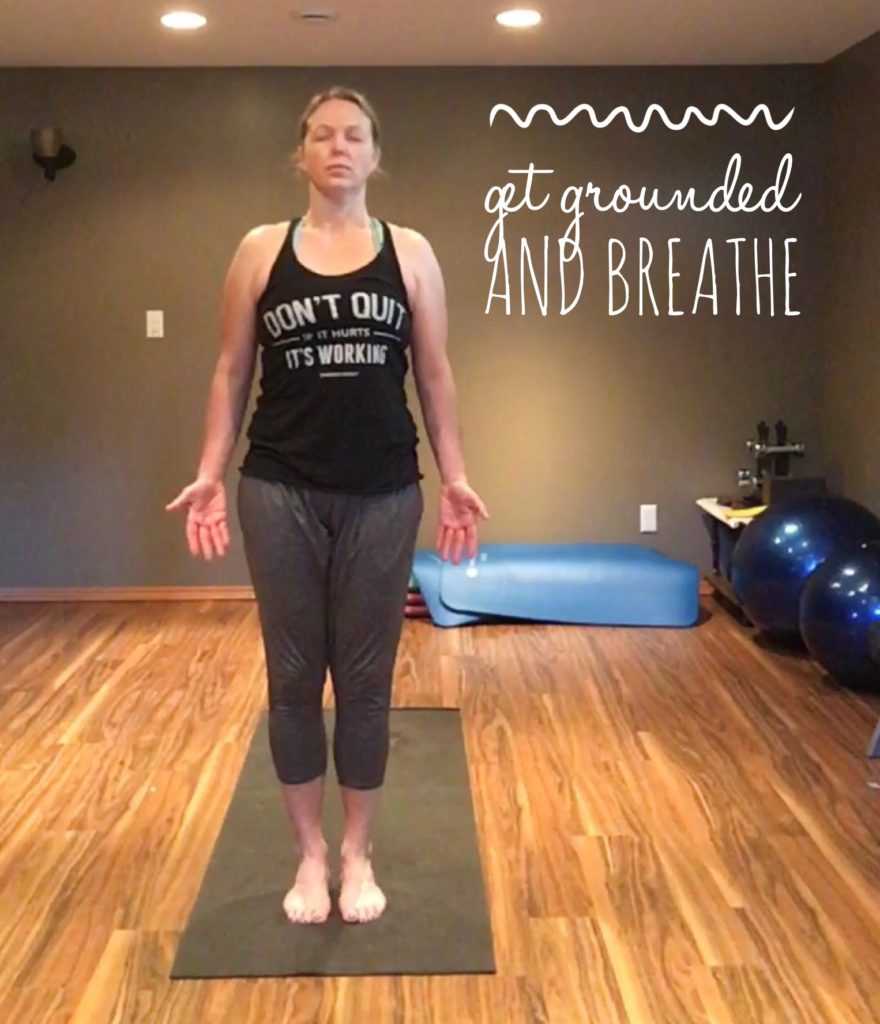 This may look like a relaxing pose, but in reality it’s very difficult! For me to sit still and relax, to breathe and get centered is a real challenge! Throughout the program I am doing now, it’s a continuous flow style of pilates and yoga which is amazing! The workout though has times when there is a need to stop moving, quiet the mind and turn those thoughts inward. These are the hardest for me to do!

You know how we have these “aha” moments when something bad happens to you and you realize that it has happened for a reason? Well I had one of those moments this morning when I realized that this type of program was exactly what I needed and my illness was what forced me into it! 😳

I am still coughing and feel rather miserable with my blocked sinuses and headache… but at least there are slight improvements each day which give me hope!  … and I am so glad to be doing a program and feeling some bit of achievement each day!  Every stretch and pushup these days helps me feel like I am doing something beneficial for my health.

I am starting a new 21-day intense nutrition reset program this coming week which is focused on cleansing, detoxifying and alkalinizing the body. I am eager for a total reset like this and I think it’s likely long overdue! I am excited about it and the potential for it to be life-changing! 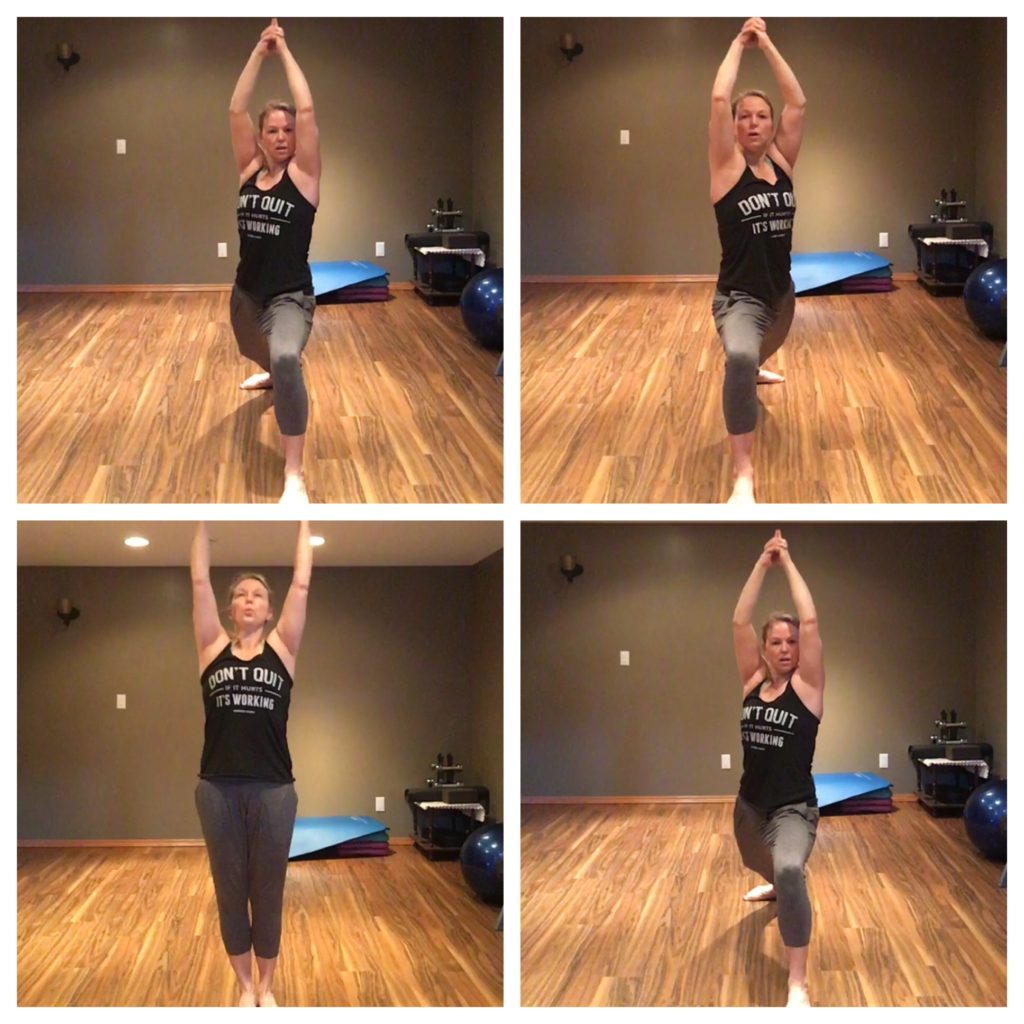 Having to start all over after an extended illness or after falling off the wagon… Is one of the hardest things to do. Not only has the fitness level dropped way off making those work outs really hard again and the loss of endurance and muscle really sucks.   …but also the habit of getting up in the morning and having a set routine and keeping up with the program has all disappeared and it takes a lot of work to get that back again. it is darn hard to implement new habits!!   It seems that habits are easy to lose and very hard to build…

Since being sick for a month, I’ve lost a lot of my cardio  endurance and strength… Yesterday,  I made the decision to start doing a yoga and Pilates combination program to maintain strength and flexibility as I heal… Day one of Program is complete ✅.. it was actually a very difficult workout for me today, but I feel accomplished since I was able to do the entire thing… Not without some sweat though😊   It feels great to be back at it… But now to maintain this habit for at least 21 to 30 days so that I can get it back again…!

Holy crap! Did day number seven of the Shaun T week challenge and it was definitely no joke! Red faced, huffing and puffing, could barely keep up, and in the end I was dripping, smiling, and satisfied that I completed this seven day challenge! Oh yeah! Really hard but so worth it! 😅

I feel so much stronger and fit after only 7 days with Shaun T! I think I am going to do this 7 day challenge AGAIN!!   Are you looking for some motivation to improve your fitness level?  To be able to run faster, go up stairs without getting tired, have more energy?  Well, achieving short challenges really gives rewards for hard work FAST and boost that motivation to amazing levels!  As of yesterday, I really hadn’t planned on doing this challenge again.  Now that I have actually completed it…the sense of accomplishment is so amazing after such a short time, that I have changed my mind!  I am gonna DO IT!

Anyone want to join me starting tomorrow for a 7- day fitness challenge? This 7-day challenge made me realize I was not in good a shape as I thought I was! 😬. So if you think you are ultra-fit…I challenge you to try the next 7 days with me! I dare you!  Come on!  Message me to join our group for the next 7 days!

Do you want to lose weight, build muscle, or feel more fit? Join Beachbody On Demand FREE TRIAL, and get unlimited access to Beachbody’s world-famous programs, including 21 Day FIX, CORE DE FORCE, and P90X. Don’t miss out on your chance for amazing results. Sign up today!

If you’re a fan of Shaun T’s functional fitness programs like INSANITY and FOCUS T25, then you’ve most likely been waiting for more of Shaun T’s legendary workouts. Well, the wait is over — Shaun Week: Insane Focus is coming exclusively to Beachbody On Demand, starting June 12th! No fancy editing, no high-falutin graphics, no fanfare — what you see is what you get: Shaun uncensored. If you want one week to challenge yourself and get back on track, this is it.

Get ready, Shaun Week is coming for you.

Not a Beachbody on Demand member yet? Sign up here for the best value in fitness.

What Is Shaun Week?

Shaun Week: Insane Focus is a seven-day, intensive, full-body boot camp developed by Shaun T to motivate you to dig deeper than you ever thought possible. Expect to be challenged, wiped out, and totally reinvigorated with cardio, intense strength conditioning, abs/core, and lots and lots of sweat. Shaun will tear you down, but build you back up better than before.

What: Seven days of furious, fat-atomizing workouts that are 30-40 minutes in length.

Who: Anyone looking to get fit. The workout’s modifier makes it adaptable to all fitness levels.

Where: Exclusively on Beachbody On Demand.

The FREE Accountability Group is open and ready for you to join us!  Add yourself to the private accountability group HERE!

I know what it feels like to be powerless.

It’s a terrible feeling to live under someone’s thumb. Or be physically or emotionally abused. It’s worse when it continues and there’s nothing you can do about it. Every year the injustice continued, I burned hotter with rage.

I vowed that when I grew up, I would never be a victim. More than that, I would not let others be victims either. I would fight for others, even rescuing them if I could – just the way I wished someone had rescued me. It wasn’t easy. The temptation to feel sorry for myself was definitely there. But the rage was bigger than my sadness, and drove me to action.

Thus a lifelong advocate was born. I lived to help others – in the school yard, among my friends, and even down to choosing my profession as a nurse.

I’ve also known a different kind of powerlessness – the feeling of having no control over my body.   Despite having loved fitness and physical activity since childhood – and even despite my training as a fitness leader! – my body began to change. My knees hurt. Chronic pain plagued my lower back.  Weight added itself to my face and waistline every year without my permission. I was so exhausted sometimes I could barely get through the day.

I remember looking in the mirror and thinking, “Is this what being forty is about? Is this just how it is?” What was happening to me?
I thought I had no choice but to submit to whatever was happening in my body. After all, I was getting older, so I may as well get used to it, or so I was told.

After a while though, I realized what I was really doing. I was simply going along with what was happening, just as my female role model had submitted to all those years ago. I was talking and living like a victim.
That’s the day I renewed my vow to take my power back. I would not be a victim anymore, even of myself, even of my own body.

I remembered something important that day: we need to be advocates for ourselves.   It’s an empowering thought, especially for someone who has been victimized and suffered abuse.

It’s strange how abuse tends to repeat and filter down– the abused often become abusers. But we don’t have to. We can thrive. For me, thriving starts with advocating – both for others and for myself.
I took charge of my fitness that year.  After signing up for the P90X Beachbody program, it promptly kicked my ass. I couldn’t do more than a few jumping jacks or two knee push-ups before falling apart. My knees and back couldn’t take it.

But I would not be a victim, even of that.
In my determination, I recruited physiotherapy help to get me through the program. I modified, I pushed, and damn-well made it through to the other side. The result?

I got my power back, baby.
I got fitter and leaner and now have some awesome before-and-after photos for starters. The whole experienced Changed. My. Life. I dove in headlong and became a coach as another way to advocate for people.
But there was so much more to it than even that.

It wasn’t just my physical strength and mobility that improved. Not only did weight come off and energy increase.   I found a new strength – the power of advocating for myself – the power of refusing to be a victim, even of myself. And that’s the key to thriving, no matter where we come from.

Be part of our Community! 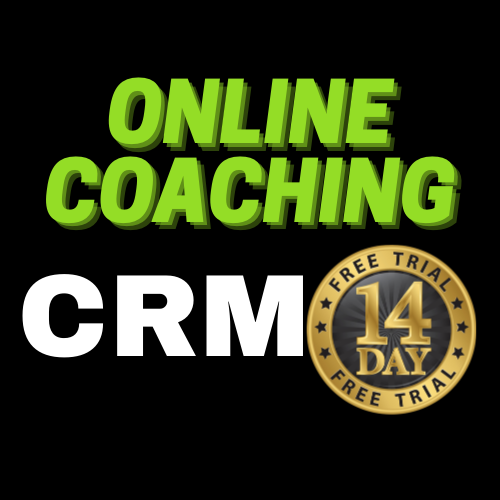